The 5 Best Oil Additives For Noisy Lifters In 2022

A lifter is a cylindrical part in your engine that works to keep it quiet and running smoothly for longer. These parts apply pressure and open the valves to achieve these goals.

Lubricating the lifter periodically can help it function a lot better. If you are on this page, it means that you are having an issue with your lifters being noisy.

This could be the effect of using the wrong lubricating oil or it is too old. Or sometimes, it could be because of dirt and sludge present in your engine and, in some cases, the lifters are too old. We have found that the easiest solution to fix the noise is to use oil additives.

Oil additives are an addition to the engine oil that augments their functioning. Engine oil works to lubricates the parts of the engine to reduce friction and the oil additive keeps those parts covered smoothened.

How to Choose Oil Additives: What to Look for?

Before you buy an oil additive, here are some factors to consider that will help you choose the right one:

There are many kinds of oil additives including oil thinners, oil thickeners, and flushing agents. However, oil additives are the most effective ones to silence noisy lifters.

These products break down the debris inside the engine while preserving the properties of the oil you’re using.

It’s a common myth that the thickest oil additive is the most functional. Sometimes it may well be the opposite as the oil needs to be thin enough to flow through the tubes inside the engine. If you have a narrow engine, a thin fluid will do a better job flowing in them.

Of course, the primary function of an oil additive, in this case, is clearing the debris and rust from the valve train. These impediments make it hard for the lifter parts to do its job properly.

This is the most common reason for the creaky noises when you are driving. The oil additive should flush away the rust and debris while moving through the passages and keep them lubricated enough to prevent their return.

A good oil additive should be able to adjust to high temperature and optimize performance. If your car blows coughs up thick black smoke from your exhaust, an oil additive may be a good solution. It reduces the engine oil loss that ends up causing thick smoke to blow out of the exhaust pipe.

While oil additives can reducing the irritating noise from your lifter, some of them can also improve the performance of your engine from within.

As the addition of an oil additive can prevent friction and subsequent heat inside the engine, it can help improve the life of the vehicle. A good branded oil can also act as an oil stabilizer. It can thicken the engine oil which upon regular use, increase your gas mileage.

You are definitely not expected to be an engineer but just glancing at the manufacturing label can give you information about what’s in the product.

Most oil additives will contain mineral oil or petroleum distillates but products with Zinc or Phosphorus will boost their performance.

They’ve also been proven to prevent quick wear and tear of your engine components.

Some oil additives have EPA certification which means that it does not contain harmful substances, while also reducing dangerous emissions. If being kinder to the environment is a priority to you, check for the EPA certification on the label before buying

Not all oil additives only work on all kinds of engines, some work only For only synthetic oil engines. Be careful to check the manufacturer’s recommendations before purchasing.

This is important as using the incorrect oil viscosity may affect the engine oil too much. If you’re unsure about any specifications of your car, ask the nearest mechanic to help you out. 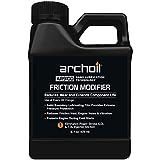 The Archoil works by coating the gearbox, engine, hydraulic tappers with a lubricating film. This oil contains zinc which reduces the wear and tear of the engine parts.

It reduces the friction in a vehicle’s lifter and eliminates 6.0 and 7.3L Powerstroke Cold Start Injector issues.

A fact that we appreciated was that it works on all diesel and gasoline engines. In addition to solving cold/hot start problems, this additive reduces the noise of the engine by a bit.

By creating a layer of lubricating film on friction surfaces, it indirectly improves power and efficiency. This is important in the long run as reduces friction will help the engine run smoothly and last longer.

Continuous use of the AR9100 will remove carbon, debris and other sludge collected in the engine. The AR100 works to improve the oxidative stability of your engine oil thus reducing the rate at which it disintegrates.

It is recommended to use 1.2 oz of the oil additive per quart of engine oil. To treat a Ford Power Stroke, one bottle would suffice. 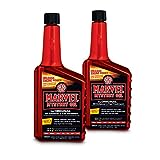 Marvel Mystery Oil is a versatile oil additive that can be used in all engines including hybrids and direct injection.

It contains detergent additives that can remove stubborn debris and sludge from the engine. It contains tricresyl phosphate which improves the sloughing capacity of the oil.

It’s versatile in usage as it can be used as a fuel additive also in all ethanol, gas, and diesel fuel blends. It can be mixed with regular and synthetic oil varieties.

It is recommended to replace 20% of your engine oil with Marvel Oil. Of course, to see improvements in fuel economy and extend the life of the lifter, you will have to use the product regularly.

The Marvel Mystery Oil claimed to improve the lubrication in the engine crankcase. Many customers found this to be true as they reported their first drive with this oil was feeling smoother and lighter.

In addition to reducing noise, Marvel also increases mileage and reduces dry starts. You can also use it as a preventative measure by using it a few hundred miles before an oil change is scheduled. Another bonus that several customers reported was the reduction of exhaust smoke.

The Liqui Moly has been formulated to reduce noise from the hydraulic tappet. It cleans the valves and holes in the lifter to optimize the performance of the tappet.

Some reviewers mentioned that the Moly saved them from an expensive tapper replacement job. With regular use, the Liqui Moly can better the performance of the engine.

I would recommend the Moly is a good oil additive for those who often drive long distances and want better engine efficiency.

It contains a high concentration of molybdenum among other chemicals which makes the additive able to withstand higher temperatures. It also works as well in cold weather as it does in hot.

The Moly is compatible with all commercial oils and can be used in gasoline and diesel engines. 300 ml of Moly is usable with any engine that uses 1.6 liters or more of engine oil.

A safe option, this will not affect the viscosity of your engine oil. But it will clean out the gunk in the tapper to ensure a reduction in the noise levels. Many customers found the Moly to do work better than ZDDP-based products as the moly forms a sealing film.

The Red line combined the capabilities of Zinc and Phosphorus to not only clean the sludge but also bring anti-wear properties.

The ingredients bring performance improvement while preventing camshaft and valve- train damage. The Red Line lubricates surfaces without an oil slick, preventing the parts from chafing against each other.

Some customers reported the engine being quieter on startup and during drives right after using the Red Line. This product is also cost-effective as one 16 ounce bottle can be used to treat 12 quarts of motor oil.

This means you will be able to squeeze in 2 oil changes with just one bottle. Most engine oils have lower ZDDP levels which can lead to a faster breakdown of components in older vehicles.

The Red Line increases this level and brings protection to the metal components of the engine. It is compatible with all kinds of motor oils so you can use this safely without worrying about the ingredients.

In addition to reducing noise from your lifters, this oil repairs piston ring seals decreases friction and facilitates a smoother startup. It also functions as a heat stabilizer as it has a high viscosity which makes it better than synthetic lubricators. 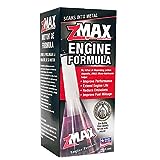 Compatible with old and new engines, the zMax micro-lubricant is easily absorbed by the internal components.

The micro-lubricant particles break the rust inside your engine and also the inner valves. They also dissolve the carbon and sludge buildup in the engine, making the lifter silent quickly.

By reducing friction between the individual parts, the zMax increases the time between oil changes and even the lifespan of your engine.

The biggest advantage is that this oil works in motorbikes and wet clutches as it does not promptly clutch spillage. It is, however, recommended to be used every 6000 miles for best results and not great as a one-time usage product.

The manufacturers recommend using a 12-ounce bottle of the zMax product for 7 quarts of oil. However, if the capacity of your tank is above that, you can add 2 ounces per additional quart.

This product is also quite affordable and goes a long way. The zMax reduces emissions in newer and older cars by reducing engine deposits.

Final Thoughts on Oil Additives for your Lifters:

Although the lifter is a little part in your car’s engine, even a slight blockage in it can cause annoying sounds.

Luckily a noisy lifter is much easier to fix than other engine malfunctions. Generally, oil additives can be mixed with motor oil any time but we also suggest adding them at every oil change.

Investing in a good oil additive will keep your lifter noise-free and engine running longer and smoother. Hey I'm Michael and I run this website. I'm a professional voiceover artist and in my search to create a silent studio I've become obsessed with soundproofing and things being quiet. Thanks for visiting and if you have any question get in touch.

SoundProofable.com is a participant in the Amazon Services LLC Associates Program, an affiliate advertising program designed to provide a means for sites to earn advertising fees by advertising and linking to amazon.com. Amazon and the Amazon logo are trademarks of Amazon.com, Inc. or its affiliates.