The majority of the noise emanating from most computers is often as a result of the spinning fans.

However, there are times when the problem isn’t the fan but instead it is the hard drive. This is easily noted by listening to the computer as you access information from your hard drive.

As your computer boots, you will listen to the noise level and if it’s noisy you might want to have that fixed.

There are two main ways you can reduce the noise level one is by enclosing the hard drive or you can replace it with one of the quietest HDD hard drive.

Although the main reason for buying the hard drive is for the low sound, there are several other factors that you ought to consider. These include:

This should be the main priority when purchasing a hard drive. Usually, the search for a new hard drive is often triggered by the growing need to have high capacity storage devices.

Once your current drive becomes inadequate you will have to add another drive to your rack. However, if you are using a laptop, you can only have one hard drive at a time.

If one is too small you have to swap it for another drive with a larger storage capacity.

Hard drives break down easily and the number of failures among hard drives is quite high. With this in mind, opt for a hard drive whose manufacturer is concerned about both the durability and reliability of the device.

This will often be represented in their warranties. Some manufacturers will offer 3-year warranties while others will go as high as 5 years.

Durability and reliability should be your main priority especially if you intend to use the drive for a couple of years. And the best way to choose a reliable hard drive is often by picking a reputable brand.

How do you intend to use the hard drive is it for storing data or transferring data. If it’s the former, average transfer speeds will do just fine.

Before making that purchase ensure that you check its rotational speeds and compare it to its competitors. Hard drives typically come in four rotational speeds; 4200, 5400, 7200 and 10,000 RPM.

The higher the RPM the faster your hard drive but also you also have to consider the cost and the noise level. If you are not a heavy gamer a 10,000 RPM hard drive would be a waste of money thus you can choose either a 7200 RPM drive or a 5400 RPM hard drive.

Also, be sure to check performance against noise level. This will help you choose an HDD drive that is not only quiet but also offers impeccable performance.

This is a drive that is built for network-attached storage devices that run constantly. This means instead of focusing on speeds, the manufacturer opted for reliability.

However, this doesn’t mean that the Toshiba hard drive has snail-paced transfer speeds. It is available in six high capacities: 4TB, 6TB, 8TB, 10TB, 12TB, and 14TB.

One of the standard features of NAS devices is their high capacities. The lowest of the Toshiba N300 has a capacity of 4TB. Since the Toshiba N300 is typically used to store important data, Toshiba has added integrated RV sensors.

You see, running several hard drives at the same time will often result in vibrations as the discs spin. This, in turn, causes read and write errors. Fortunately, with the integrated RV sensors all these errors can be avoided.

The drive detects these tremors and tries to compensate for these vibrations which ensure that the data remains intact. Running multiple drives together can often lead to overheating.

If the heat continues to increase can lead to further problems. Toshiba tries to minimize this by equipping the N300 with heat prevention technology.

With this technology, the hard drive can cope with the higher temperatures and lower the seek speed to ensure that the discs are running as cool as possible.

There is also the issue of sacrificing speed for reliability. What this means is that the N300 is ideal for storing data for long as opposed to tasks where data transfer speeds are essential.

Although the Toshiba N300 tends to slow down when it gets hot, it can still achieve speeds of 200MB/s. It boasts of 7200 RPM which means it has superior speeds than hard drives with 5400 RPM.

The device was impressive in the ATTO benchmark and in the real-time tests, it was able to transfer 1 GB of data in about 19 seconds. 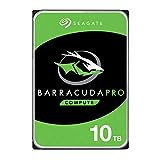 The Barracuda Pro is a high capacity hard disk drive with a whopping 10TB and 7200 RPM. Aside from high capacity and RPM, the Seagate Barracuda pro also decent endurance and 220MB/s transfer rate.

In terms of performance, the Barracuda pro blasted almost everything we threw at it. It could transfer large files at speeds ranging from 229 MB/s to 245MB/s.

The average writing speeds were about 229MB/s while the reading speeds clocked 245MB/s. These impressive speeds can be attributed to the high-quality conventional magnetic recording drive that has 14 platters plus7 read-write heads.

Combine this with the 256MB cache and the 7200 RPM and you’ve got a performer. It only uses 6.8 W which makes it one of the most efficient HDDs available today.

It’s ideal for creative professionals or any other user that wants to improve the capacity of their home server, DAS or desktop. The hard drive is also surprisingly quiet for a drive with such impressive performance.

With the Barracuda pro, you are covered for the next five years. However, the warranty is limited, it covers only replacement and leaves out data recovery.

To get data recovery, you are required to subscribe to the Seagate Rescue service that costs a little bit for two years.

The WD Red hard drive comes in a wide range of storage capacities that range from 1TB to 12TB. It is designed for NAS systems and it can handle the workload of 180 TB per year.

In order to increase the storage capacity of the WD Red, the manufacturer used HelioSeal technology. This technology uses helium as opposed to air since it is lighter.

In turn, this reduces the resistance as the drive moves thus allowing it to run faster. This also allows the manufacturers to add more platters to improve the storage capacity.

The drive is also equipped with the NASWare 3.0 firmware that allows you to install the drive in NAS devices. It can be paired with up to 8 bays which often causes overheating.

WD tries to counter this by reducing energy consumption and vibration of the drive. The drive also features RAID error technology and it has an MTBF of about 1 million hours.

This guarantees that your drive will not fail, unlike the 2TB capacities which are known to have high failure rates. In addition, the drive comes with a 3-year warranty.

Compared to other hard drives, the WD red has a low RPM at around 5400. This is significantly lower than what Seagate has to offer.

While this might seem like a downside, it has its advantages. For starters, a low RPM means that the energy consumption is lower compared to other drives with 7200 RPMs.

The drive is also less noisy and makes very little vibrations. The real-life performance was average with the drive recording read speeds of about 185 MB/s. The write speeds also averaged about 185MB/s.

This shows the difference between 7200RPM and 5400RPM as the latter can clock speeds as high as 250MB/s.

SSD are fast becoming the preferred choice for PCs due to their incredible performance. However, HDD hard drives still remain a top choice for many, especially where cost and capacity factors greatly outweigh performance requirements.

Among the leading HDD, drive producers are Western Digital, which has been around for close to half a century. Over the years it has produced incredible drives such as the WD Red 6TB, which is built to withstand shock and vibration.

However, unlike the N300 series, the WD Red drives are not equipped with RV sensors.

The WD Red drive can run for 24 hours a day with a yearly workload rate of 180TB. The drive also has built-in NASware software which helps optimize performance as well as power consumption.

This helps reduces drive temperature thus increasing reliability. The WD red has a 5400 RPM which theoretically means translates to reduced performance but it also means that there will be a reduction in power consumption and heat.

The average read speeds of the WB red are 234.6 MB/s while the write speeds are 221.9MB/s. Although the drive doesn’t boast of having a lot of features it is very quiet. This is attributed to its low RPM 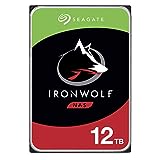 This is a hard drive that is built for NAS devices but it’s intended to be more efficient at serving multi-purpose use cases.

It’s slightly less powerful than the Seagate Barracuda Pro but it’s still reliable enough to transfer large amounts of files at a speed of 250MB/s.

It’s a 3.5-inch drive that rotates at 7200 RPM and uses the parallel magnetic recording. It has a 256MB cache and uses the SATA 6bps interface.

Instead of air, the drive uses helium to reduce the drag, especially on the spinning patterns. Depending on the version you get varying warranties.

The manufacturer claims that the drive can transfer files at 210MB/s but after testing it’s noted that the drive surpassed this and hit 250MB/s. The device also runs quietly despite its above-average performance.

HDD storage devices have been around for several decades but a few years back, the technology world witnesses the introduction of the SSD and the SSHD.

These are Solid State Drives and Solid State Hybrid Drives respectively. The SSD has a slight edge over the HDD drive in that it does not have to move mechanical parts.

In simple terms, the SSD is viewed as a bigger version of the flash drive. On the other hand, the SSHD is a crossbreed of the HDD and the SSD.

Each of these drives has its advantages and downsides. For example, the SSD has faster transfer speeds compared to the HDD.

Their transfer speeds range from 200 MB/s to 500 MB/s which is close to double what HDD drives have to offer. However, HDDs offer more storage for significantly lower costs compared to SSDs. At the end of it all, your choice depends on how much you are willing to spend.

Hey I'm Michael and I run this website. I'm a professional voiceover artist and in my search to create a silent studio I've become obsessed with soundproofing and things being quiet. Thanks for visiting and if you have any question get in touch.

SoundProofable.com is a participant in the Amazon Services LLC Associates Program, an affiliate advertising program designed to provide a means for sites to earn advertising fees by advertising and linking to amazon.com. Amazon and the Amazon logo are trademarks of Amazon.com, Inc. or its affiliates.